Boots with the Fur

Everyone loves FloRida's song "Low." But one person loves it more than you. Turn up your speakers please:

I think this is what youtube was made for. EXTREMELY literal photo-lyrical interpretations of rap songs. Well that and celebrity photo montages set to Vanessa Carlton.
Posted by Bridget at 11:23 AM 1 comment:

I'm calling on Jennifer to help me. I was in the Liz Christy garden this weekend for the first time and saw this plant, which was very odd. The branches were really smooth and caught my eye. What is this? 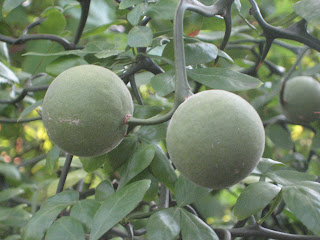 In other news, I'm ashamed to admit that I've lost my Olympic fever. After Phelps and gymnastics the rest is kind of a snooze fest. It's a lot to get invested for another entire week of completely different sports and athletes. It's not like I actually follow any of these people or events between the Olympics. So, bring on the conventions.

There is apparently supposed to be a big announcement tomorrow: Obama's Running Mate. I did not sign up for the breaking news text from Barack's camp. This, to me, is the stupidest thing ever. Come on! Are they really hoping to mobilize the youth by sending a text message when we can go and read the Drudge headline 2.5 seconds later? I am excited and increasingly anxious for the election as the thought of a McCain administration is close to unbearable. This is probably the most overstated and blindingly obvious statement I've made in a while.

Moving On. I took advantage of the NYC Summer Streets weekend before last. Here is a photo of Lafayette. 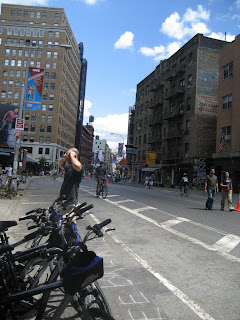 And here's a picture from the deck of the New Museum. Not a fan of the museum, love the view. 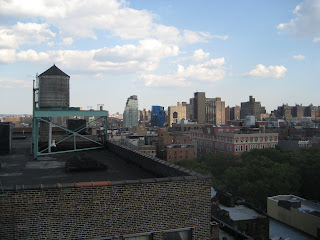 And I saw Keanu Reeves yesterday. Just a sidenote...

I took this picture last night on the bridge, from pretty much the same place as the earlier photo. I feel the two pictures really explore themes of night and day, gray vs. color, good meets evil. Or, it really just looks cool. I was trying to take a clear pic of the Empire State building which is apparently, for the first time!, having different color schemes on each of its sides to represent different countries performing in the Olympics. Can't you tell from this picture? 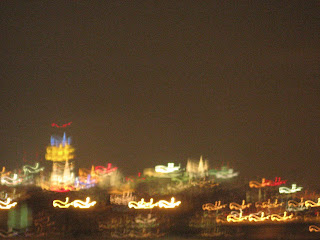 It is the embodiment of the Olympic spirit, no?

I need to go dodge another rainstorm now. This seems to be my life these days, tracking storms on wunderground.com and wondering if there is enough of a clear patch on the radar screen so I can ride my bike home. No wonder these blog posts are so exciting!

I took this photo on the Brooklyn Bridge this morning on my to work. The city looked very pretty and silvery, like San Francisco. 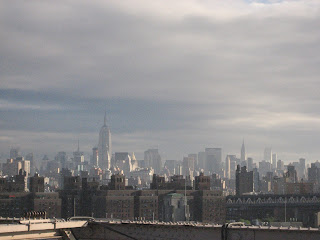 But the truth is I was just really tired from biking up that damn incline. So why not take a photo to disguise the fact that my legs were shaking and about to give out on me? Not a good morning. But a pretty one. Kind of like Katie Holmes. Undeniably pretty, but undeniably evil.
Posted by Bridget at 3:06 PM 1 comment:

Email ThisBlogThis!Share to TwitterShare to FacebookShare to Pinterest
Labels: hideous

I've got the Olympic Fever. Okay, well maybe I would have the fever if when I turned on to watch the Olympics it wasn't just badminton or beach volleyball. The fact that beach volleyball is actually an Olympic sport cracks me up. The name alone brings to mind people in Venice Beach tourist t shirts with the sleeves cut off with strands of beads on the bottom of the shirt. You know what I am talking about.

Anyway, I logged on to nbc's Olympics site and watched the apparently Earth shattering swimming relay I missed. It was pretty awesome and the quality of the video online was impressive. Go technology. And Michael Phelps. I would also like to thank Kadi for leading me to this inspirational video. Volume up, please:

How can I say anything about Phelps at all when Smashmouth says it so much better?

Anyway, there were some awesome thunder storms today. I'm still a little scared and haven't left my corner. Here's something that might brighten your day if you too are in a gray, stormy, cloud. 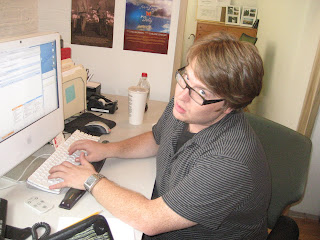 For Better, or for Worse, I'm Back.

Dear Readers,
It's been a long, hard absence. I realize that. And I sincerely apologize. Let's just blame it on the rain, okay? Did I really just say that? You gotta blame it on somethin'.

Anyway, the sad thing is after 4 months I have nothing to write.

Everyone should take advantage of the NYC summer streets tomorrow:
http://www.nyc.gov/html/dot/summerstreets/html/route/route.shtml

And watch the Olympics. I have a Google spreadsheet online with all of my viewings scheduled. Just let me know if you want to access it. I'll probably be live-blogging the equestrian events.

I want to write a funny tidbit and I really have nothing. Well, except for the fact that my writing partner/roommate/co-worker/half-brother's zipper on his too-cute cords broke today. So he's feeling awkward and in a little bit of pain with his faulty pants. Cheer up, Brian! It is Friday after all.

Missing you now more than ever,
Bridget
Posted by Bridget at 3:47 PM No comments: