Oh man, if I don't know where Fitty's at, how can I make an informed decision?
Posted by Bridget at 9:22 PM No comments:

Email ThisBlogThis!Share to TwitterShare to FacebookShare to Pinterest
Labels: 50 Cent

So About Those Virgins...

There is an article in the NYT magazine about abstinence and in particular abstinence clubs at Ivy League schools. Abstinence is a fascinating topic to me, especially in the past decade with Bush and his abstinence-only education policies. I think it’s absurd that this administration and numerous other right-wing or evangelical groups actually claim that educating young adults about things like safe sex, plan b or gardisil, is in turn promoting promiscuity, debauchery, and a miserable, loveless life.

Anyway, I digress. In the article, they profile this student at Harvard who is the president of one such Virginity club. The author of the article almost seems to be winking at the reader while he writes about and interviews her. It’s easy to do as an adult, since you can just sort of wave of the naiveté of a fervent youth. It’s also easy to do when she’s shocked that her co-president (a guy) has lustful thoughts (gasp!) and has masturbated (double gasp...from him. Okay, that was terrible.) You quickly realize how young she really is. But abstinence is such a tricky issue. This young woman, and other like minded people are so focused on their message of not having sex that perhaps they don’t stop to see if this is actually the decision they truly want to make. It becomes more about the stance than the actual act of sex. And of course half the time I am thinking “don’t knock it til you’ve tried it!” but I guess that goes against the whole “waiting til marriage” thing.

I wholeheartedly agree that people should only have sex because they want to. And at the same time, if people want to wait that should be their choice as well. It’s terrible that people (girls especially) get pressured into doing it or doing things against their will. But this speaks more to empowering women, and arming them with confidence and self esteem, than it does to promoting abstinence. How you can successfully do this, I have no idea. But to promote something so ardently, whether it be abstinence or not having abortions, always rubs me the wrong way...no pun intended this time. Maybe because I am not for anyone telling me that I CANNOT do something. I’m all for people strongly advocating and protesting on behalf of things like gay marriage or freedom of speech. But who’s to tell me I can’t (or shouldn’t) have sex? Or marry a woman? Or eat trans fat!

I think what this all boils down to is my stubborn independence and the few months I was living with my aunt and uncle in the 80’s. Like I told them, if you’re not my mom, you’re not the boss of me. Anyway, I am sure there are feminists galore who can sum this up much more succinctly and articulately than I just have. And I’m not exactly sure what my point is, except to say: it’s my way or the highway and if I don’t like your views, you’re stupid. Fair enough, right?

In unrelated news, Terry O’Quinn came up in conversation and with any mention of Terry, one must recognize his stellar turn in the classic 80’s hit “The Stepfather.” Upon close inspection of the official IMDB page, I discovered this tagline: Daddy's Home and He's Not Very Happy. Yeah, tell me something I don’t know, Internet Movie Database...* 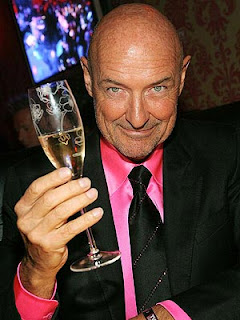 PS: I loved this look.

Also, has anyone seen the trailer for Helen Hunt’s directorial debut? Hangdog, anyone?

Bare Bush...that was too easy

So Jennifer requested a Carla Bruni/Laura Bush side by side comparison. I would love to oblige, especially under the recent headlines Bruni is getting. But I don’t think I can find nude photos of Carla AND Laura on the internet...

I would love it, though, if the UK tabloids were going nuts over some decade old glamour shots of Laura in the buff. That sweet smile, the perfectly coiffed bob. God love ‘er, but she’s ridiculously boring. 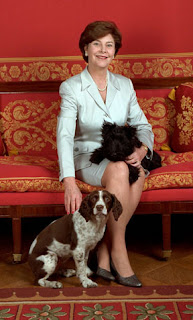 So obviously I am trying to be better about updating my blog which means: even MORE mundane posts about random things! And I don’t even have anything to offer today, save my two bits on Laura Bush posing naked. But chew on this: I’m going out for Mexican tonight (sorry Kadi). Will I get a big burrito? Some enchiladas? Tune in tomorrow to find out.

If anyone wants to debate why Europeans are inherently cooler than Americans they need to look no further than this: 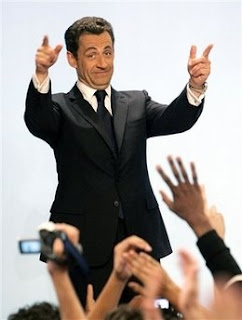 Their president is more rock star than policy maker.

And then look at this: 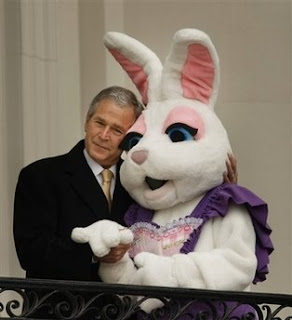 IS HE SERIOUS? He looks as sincere as my cousin Stacy hugging that Easter Bunny (I mean that in the best way, Stace!) It really doesn't strike me as creepy, which might be my gut reaction if it was say, Spitzer (remind me to blog about my Spitzer dream) or any other man over 10. Bush really might just have the mental capacity of a 9-year-old. I truly believe he was as enthused to hug that bunny as I was to ride the Flying Dumbo ride at Disneyland when I was 3.

I need to thank Drudge for having both of those photos on his page.

In TV news, we all know I claim to be a non-tv person. Do you like how I wrote "we all" as if the readership of this blog is more than 3 people? Anyway, I claim I don't watch a lot of TV and I claim not to watch shows regularly, save "Project Runway." But I was so excited yesterday when I saw a promo for the new season of "Workout." This was a show I dismissed and would only watch out of laziness because it aired after Runway at some point. But I totally got addicted thanks to the Bravo programming gods who insist on airing their original shows non-stop. Suffice to say, I would so set my tivo to record...if I had a tivo. But why would I need one of those? I'm not a tv person, remember?

At least this is what I always thought. Until Chili's decided to promote their new bacon burgers with TRIPLE THICK BACON! The strips are seriously an inch thick! And if you've seen the commercial there are like four pieces of bacon on every burger. Falling onto the grill, falling on the burger. Bacon everywhere.

We just had a discussion in my office about this and the consensus is that bacon is supposed to be crispy. When it's thicker than a pink eraser you really don't achieve the desired bacon effect. I will admit that I don't eat bacon regularly and can in no way consider myself a bacon connoisseur. But even a novice bacon eater recognizes a gross bacon misjudgement when they see one.

You can try to view the commercial here

Or here's a photo:

And um, sorry I just wrote an entire post about bacon.