SIck of Being Sick

I'm one of those people who never gets sick. Seriously. If I do get sick it's maybe a slight fever or a runny nose for a day or two. So far, in the last month, I've been sick three times. THREE TIMES! It's hideous! I got a disturbingly debilitating stomach flu when I was in California for the holidays. I had a slight cold a few weeks ago and now i have something else which consists of a heinous cough and a fever. My throat is so sore that when I am walking outside in the cold my throat burns from the cold, dry air. I mean, not that I'm complaining or anything.

So, getting sick sucks. I guess the only consolation is that it's January and at least I'm not missing out on amazing weather. Oh, that and I got to catch up on the "Rock of Love" episode I missed the other night. What's better than a skanky, manly looking French girl getting naked for a has been rock star? Oh my god, I am dying right now. I just found her (Angelique's) myspace page and it says she's only 25! I still can't even believe she's a female. I will miss her... 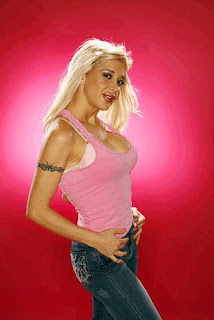 Email ThisBlogThis!Share to TwitterShare to FacebookShare to Pinterest
Labels: rock of love, sick

If These Balls Could...

I know there is a myriad of important things going on in the world (recessions? Heath? election?) but what is more important than my inaugural dodgeball game of the season? not much. And how exciting were our first 2 games? Not very. If These Balls Could Talk 2 got creamed.

What amazes me about this dodgeball league is that people actually take it seriously. We played a team last night that is a notoriously good - and brutal - team. They happen to have the tallest person known to man on their team and a few other beasts. But they are ruthless! Not only do they play a fierce game (and fierce in a bad way not in a gay heeeey! way), they are not even congenial people between games. They are just straight up assholes. It's like they got picked on their entire lives, they never excelled at sports and now are exacting their revenge. Or better yet, all they ever had was sports and come graduation from high school or college or whatever, they find themselves in the sport-free zone of NYC and need to fight poor defenseless non-jocks like the people on my team. I bet they all work at investment banks or something. Not that I am opposed to investment bankers.

Obviously, I never played sports in high school. Well I am only assuming that's obvious by the comments I made above. But let's just say that in high school I was one of the girls who had to take a second year of P.E. because I wasn't in a sport. And because I had a full schedule of AP and IB and BS classes I didn't have time to take this second year of P.E. until my junior year. But even then, I only had time to take half a semester. And I got lucky. My best friend and I ended up in a class full of sophomore boys. Just us and a bunch of tiny, adolescent, squeaky voiced little guys. And, naturally, we ruled the class. We were always team captains, rallying the troops, telling the teacher we had our periods so we didn't have to do anything. You know, taking advantage of our female status. And it was ridiculously fun.

But then senior year comes around. Last semester. And I still have half a P.E. class to finish. And no best friend this time. So there I am, moments from graduating, caring more about my boyfriend and off campus lunch than badminton, in a class full of non-athletic sophomore girls. It was like the worst stereotypes you can imagine came to life: the girl in the wheelchair, the fat girl, the non-English speaking crew, the girl who always wore sweats - in and out of class. And then me. I was forced to make friends with some semi-socially awkward girls who had collections of lip balm and hair scrunchies so I could partner with them versus the girl who smelled like milk and old bread. There was one girl I became particularly close with, if you call chatting in an awkward class "close." She was a senior, like myself. I had vaguely seen her around over the course of the past four years. She was a quieter girl, nerdy, but had a large group of co-nerdy girlfriends. Not that i was miss popularity or anything, but I had my share of friends spread around the school. The funny thing with this girl was that we would see each other around campus and quietly nod or smile, acknowledging each other. It was like we were having a secret love affair and we didn't want our friends to know. Just two girls from different sides of the tracks. I still think about her now, wondering how things turned out. If she ever finished UCSB like she wanted, if she ever fell in love. Who am I? Kevin Arnold?

Anyway, flash forward to the present, I'm back in the gym. Wishing I had given more thought to that second year of P.E. and writing a post that would make Brian proud, ie: taking an epic stroll down memory lane sans the super witty one-liners.

Love and Dodgeball,
Bridget
Posted by Bridget at 1:32 PM 4 comments:

Today is Tuesday. It's January. It's 5:46 and totally dark out. What else is there to say?

Oh, right! Gym news! You can imagine how ecstatic I was this morning when I turned on Bravo and saw the opening credits to "European Vacation." Yesterday, they were airing some movie with Ewan McGregor playing a stock trader in Singapore. It was evident that it was based on a true story, because it was exhaustively detailed which meant it was very boring.

The same, however, cannot be said for the second installment of the Griswold family saga. I happen to think that this one is highly under appreciated. There are the die hard "Vacation" fans and a younger crop of "Christmas Vacation" loyalists, but I would say the majority of people dismiss their trip over the pond. But why? There are many funny bits, but I think the crown jewel is the daughter, Audrey (played by Dana Hill.) She's funny just to look at. She's kind of a little creature with a raspy voice. And her endless "I miss Jack"s are insane! And it seemed even funnier that they kept highlighting the fact that she didn't want to gain weight, when she looked like a chunk. But then you'd see a long shot of her and realize she was actually really tiny.

The sad thing is that she really wasn't a little creature. She was sick and had diabetes which apparently stunted her growth and then put her into a coma and eventually killed her! It's terrible. So this post goes out to her. 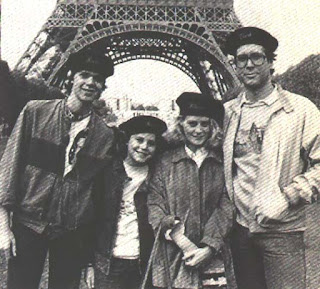 And to the scene in Italy when the Griswolds get hideous new outfits. That is probably why everyone hates the movie.

Love and basketball,
Bridget
Posted by Bridget at 5:45 PM 2 comments:

Okay, I am half kidding with the live blogging thing. And the five people who read this were promptly emailed when this incident happened. I work across the street (caddy corner if we’re getting specific, okay?) from this new Trump SoHo BS tower that is going up. It’s huge and being constructed at record pace and the neighborhood hates it. And I hate it! I walk by it every day on my way to and from work and the construction site freaks me out. They fill they huge metal buckets with cement and hoist them via crane to the top of the building, which is apparently 46 stories above me, little pedestrian, on the street. And I swear they fly up. I have wanted to write about this fact alone, because this alone freaks me out.

We moved into our new office space at the start of the year (caddy corner...ugh, worst phrase) and now I get a beautiful view of the building and the cement buckets right outside the window next to my desk. So today, there was a huge noise and my boss and co-workers and I clamor to the window to see an unsettling amount of debris fall from the building, and further see that a large chunk of the top floors are gone. Chaos ensued, FDNY showed up, EMTs, the news crews, the whole deal. Apparently, one person died immediately, which is horribly tragic. One of the construction workers was even trapped in a safety net and we saw them bring him down in his own metal bucket. He was promptly whisked away on a stretcher when he got to street level.

Needless to say (even though I already have 6 times in this post), shit like this really freaks me out! Most of you know I did a short film in college about a woman who wears a bicycle helmet all of the time. And while most of that stemmed from growing up in California with earthquakes and whatnot, living in New York City does not help calm my latent things-falling-down-on-my-head paranoia (I’m 90% sure that is an accurate, medical term.) You always hear about scaffolding coming down, or a crane load falling from a construction site (as exemplified by today’s incident.) So maybe there’s an actual reason for my paranoia. Maybe I’ll start wearing a helmet or maybe I just won’t leave my apartment. Okay, let’s be honest, if that happens it’s most likely because Ocean’s 11 is airing on TBS or something. You know I’m a sucker for a tv movie “event.”

Here are some photos: 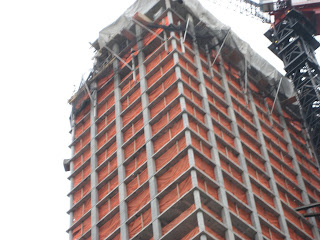 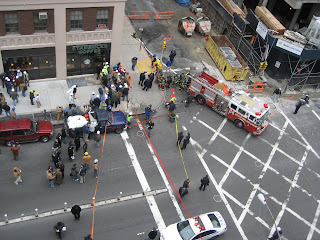 They just pulled out another person on a stretcher. It’s been about 2 hours. Apparently he was trapped somehow. Here’s a link to some more accurate reporting on Gothamist.

Anyway, after all that, I am not really sure what my point is except to say that I am no longer walking along this stretch of Spring St. on my way to work. And I did a google search of caddy corner to make sure I had the correct spelling and I found out I could have also used: kitty corner (this is just straight up annoying) or caddy wompus! I really missed the boat on caddy wompus....there’s always next time I guess.

Okay enough about Trump. I have to get back to uploading a new facebook photo.

Well it’s a new year and what better way to ring it in than with this uplifting news story.

Anyway, on a brighter note it’s almost 60 degrees in the middle of January in New York City. That is cause for celebration.